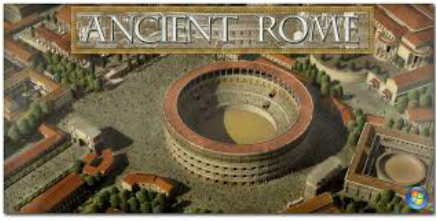 1. How did the location, geography, and climate of Rome affect the development of civilization there?

The location of Rome influenced civilization there because Rome was in the center of Italy so domination of the entire peninsula was easy. Rome was in the center of the Mediterranean Sea so they could control trade in the Mediterranean. The geography of Rome was that the city was surrounded by seven hills so it could be easily defended. Rome was on the Tiber River so the Romans could trade along it, but far enough inland so a naval attack would not be easy.

The climate of Rome was a warm Mediterranean climate with mild winters and hot, dry summers so a small amount of grain could be grown, but Egypt still produced the most grain in the Mediterranean. Like the Greeks, the Romans could grow grapes and olives for wine and oil to trade.

2. How were the Romans influenced by Greek culture and ideas?

3. How was the Roman Republic founded and organized?

The myth of Rome's founding included the story of Romulus and Remus. The reality was that Rome began as a small fishing village which developed into a monarchy. Later, the Etruscans conquer the Romans and rule them.

The Roman Republic was founded after one of the Etruscan kings was especially cruel and the Romans rebelled and threw the Etruscans out of Rome. The Romans did not want one person to take power again so they used a republic where the citizens from rich and poor classes elected leaders who made decisions for the benefit of both classes. There could be a dictator if there was an emergency, but after the emergency passed they went back to the republican system.

The main offices of the Republic included the consuls, senators, tribunes, and the citizens’ assembly.

Julius Caesar was Roman general who conquered Gaul (France) for Rome. Julius Caesar thought that the republic wasn’t working and he thought that Rome needed a centralized government and that he should be in charge.

Julius Caesar had himself declared a dictator for life. Many Senators thought that Julius Caesar was going to get to much power and be like one of the Etruscan kings, so they assassinated him thinking that it would restore the Roman Republic but after a civil war Octavian Caesar became emperor of Rome. The Republic never came back.

Augustus Caesar was Julius Caesar’s nephew and adopted son. After Julius Caesar died there was a civil war. During the war Augustus (then called Octavian) defeated all his political rivals and had himself crowned “emperor.” Rome had grown during the civil war: Egypt was now entirely under Roman control.

A few of his accomplishments were that he built roads to connect the empire, and he had a fire department. He built Roman cities in conquered lands to spread Roman culture and change the barbarians into proper Roman citizens. There was a period of 200 years of peace begun by Augustus. Augustus rebuilt many temples, started a police force, and gave out food to the poor.


6. What were some of the successes and failures of the Roman Empire?

Some of the successes of the Roman Empire were they conquered the entire Mediterranean area and spread their culture around a lot of the known world. The Romans also built roads, aqueducts to carry water to cities, and used other people’s ideas to a much bigger purpose like using Etruscan arches and making the Coliseum. The Romans built the strongest army and greatest engineering masterpieces in ancient history.

Some of the failures of the Roman Empire were there were occasionally emperors who were mentally unstable and made very bad decisions for the Roman people. The Romans also persecuted people who didn’t worship Roman gods. There also was a very big difference between rich people and poor people, plus the Romans allowed slavery to exist. The Romans built an empire that became too vast to manage and eventually lost control over most of their territory.

7. How did the Roman Empire come to an end?

The Roman Empire ended when the borders got so long that armies couldn’t stop all the barbarians who wanted to invade Rome. Wave after wave of Gothic and Germanic tribes invaded Roman territory. Civil war also killed a lot of men who could fight the barbarians. Eventually barbarians got to the city of Rome itself and sacked it. Major rebellions broke out against Roman control in most of the foreign territories. Lastly, in 410 A.D. and again in 476 A.D., the Goths sacked the city of Rome itself.

Internally, the Roman Empire had tremendous money problems and eventually went broke. The government could no longer pay foreign soldiers to defend against attack. Bad leaders made the situation worse, and the empire broke apart.

8. What were some of the most important contributions of the Romans?

One of the most important contributions of the Romans was the republican form of government that we use today. We have a senate like the Romans and we elect our leaders.

Another contribution of the Romans was in the area of architectural engineering. We use arches now and columns in our government buildings.

We use the Roman alphabet and most of the words in our language come from Latin, as do all of the Romance languages (French, Italian, Spanish, Portuguese, etc.).

Please pick up your Adventure Quest assignment in our Google classroom.